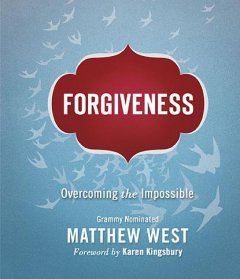 Matthew West has always been a story-teller, through music though.  “Next Thing You Know,” off of his History album, is a story about himself.  But for his Into The Light album, he decided to go a different route.

He had to have surgery that kept him silent for a year.  A singer who had to keep quiet…that’s rough.  But after that year, he got right back on the saddle.  It never brought him down, and out of it, came his album, “Something To Say.”  I’m sure that sitting quiet for a year puts a new perspective on things, makes you sit with yourself and think.  A lot.

I missed Matthew the first chance I got to see him.  As I walked into the venue, he was finishing up his last song, and he walked off stage.  I was quite bummed.  But, many years later, I got the chance to see him at TBN in Nashville (Hendersonville), all by himself.  Boy was I overjoyed.  I was finally going to see him in concert.  I didn’t know what to expect at first, but then I found out that this “concert” was for his newest album, which was not out yet.

Matthew decided to get other people’s stories.  He looked through countless e-mails, and the stories that touched him the most, he made songs about them.  And he put them on his album.  Yes, his whole Into The Light album is full of true stories, in song form.  In comes the book.

This book tells those stories.  “Behind the songs” type of thing.  “Forgiveness” is the name of a song on the album, but it is also his first single, and the first chapter of the book.  The story behind that song is about a drunk driver who killed this mother’s daughter. While the drunk driver is on his way to jail, the mom asks that he get a shorter sentence.  Wow, talk about forgiveness!

Matthew tells the true story, sent in by the person, then he talks about the story, his thoughts and what the Bible says in relation to the story, and then at the end he writes about how he wrote the song that goes along with it.  So, you can see the process he went through as he wrote for the album.  At the end of the book, he writes about his own story, the story that goes along with “Next Thing You Know.”  He is a preacher’s kid, but he never accepted Jesus until he was thirteen, sitting in the den flipping through the channels on the t.v.  Looking for a baseball game, he stopped to watch Billy Graham.

This isn’t the only book he’s written.  He another one, “The Story of Your Life” that goes along with his album of the same name.  That album is also filled with true stories from people who have e-mailed him.

It’s a very short, small book.  But it’s packed with humor (Matthew is quite the funny guy), lessons to be learned, and chains to be broken.  There is a story in there for everyone: those who have lost, those who are alone, those who are addicts, those who feel unloved.  I’d give it five stars just for those reasons alone.

If you want to learn how others have received and given forgiveness, or you just like true stories, sign up for BookSneeze and get it for free.  It’s well worth reading.

Ideologies separate us. Dreams and anguish bring us together.

What Do I Write?

You Could Use Another Newsletter